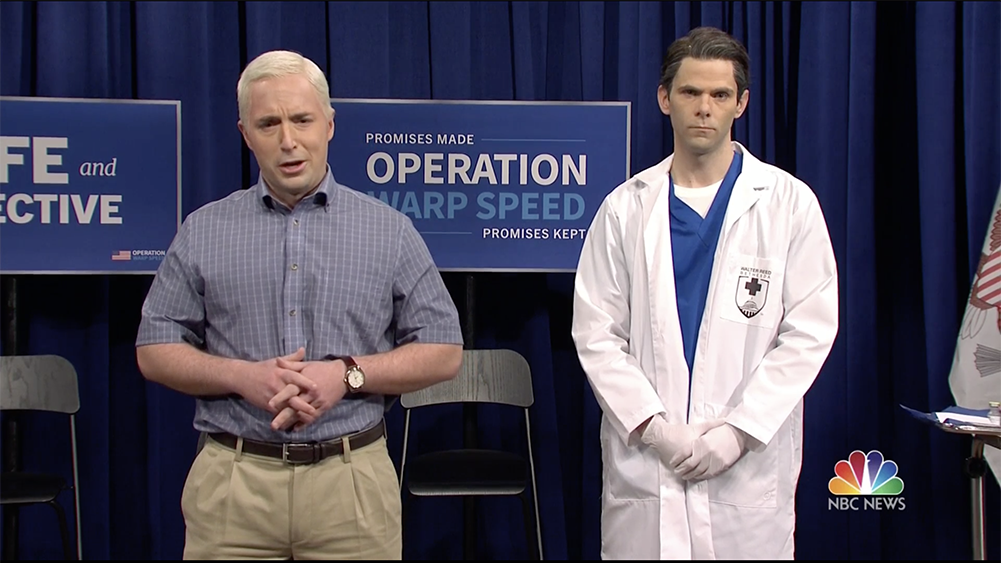 “Before we begin, I just want to reassure the American people that this vaccine is completely safe and harmless,” Pence said. “That is why President Trump refuses to take it or talk about it. Instead he sent me to be his, what do you call it?”

“Human shield,” a doctor, ready to inject him, answered.

“That’s right. That’s exactly the phrase he used. He is a colorful man, and even more fun on steroids,” Pence said.

The real Mike Pence got a Covid-19 vaccine on Friday, in an event that was televised on network morning shows as lawmakers try to assure the public of its safety and effectiveness. The SNL riff was on Pence’s seeming inability to say anything that would cross the boss, even when the president has repeatedly contradicted the White House coronavirus task force and made wild claims about the virus.

“So thank you to all Americans for trusting President Trump with your health. He may not be doing president anymore, but he still care deeply about not going to prison,” Pence said.

Then Pence bends over to have the vaccine injected in his rear end. “If you’re a doctor, you can go in,” he said.

“No Mr. Vice President, it is a simple injection in your arm,” the doctor answered.

“How did you even get into the White House?” Pence asked her.

“I won more votes,” she says, as the audience loudly applauded.

“Well I suppose you and Joe might be in here soon if those election results hold up,” Pence said, then added, “I’m sorry. Trump made me do it.”

Then Joe Biden appeared, with Alex Moffat taking over as the president elect from Jim Carrey.

“Yep. Like Colonel Sanders. Every time you see me I am a different guy,” responded Biden, referring to the restaurant chain’s recent short film in which Mario Lopez plays a steamier version of the founder.

SNL then gave a glimpse of how it will turn its attention to Biden as it riffed on the next president’s tendency to put his foot in his mouth — and the efforts by those around him to try to prevent that from happening.

Biden said, “I just want the American people to know one thing. You are about to have a real leader again. You are going to have the most diverse cabinet in the history of American politics.”

Harris then added, “And I will make sure that Joe never specifies what he means by ‘diverse.’ That is my Christmas present to you, America.”

“Or you celebrate Kwanza,” Biden replied.

Harris then interjected, “Nope, we got to go.”

To wrap it up, Pence looked the camera and said, “Well, America, I hope you trust the vaccine now. You know how it works because you can buy it in the soda fridge at CVS.”

Watch the video above.